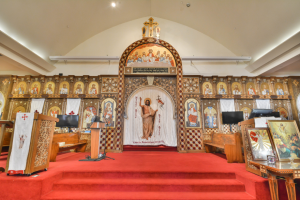 The Coptic Church service in Montreal started in the Sixties, when then Pope Kirollos VI sent Fr. Raphael Younan Nakhla to Montreal to establish a Church in the name of St Mark. As the church flourished and grew, the need for a second Church was great.

A group of Servants in 1974 started to hold Bible study meetings in their homes, where they discussed their desire to establish a second church under the name of The Virgin Mary in Montreal. The founding servants then brought the idea to Fr. Raphael Younan Nakhla and asked him to write to the Pope Shenouda III to get his approval, and by January 11, 1975, His Holiness had sent back a letter with His blessings. The registration of the Church was quickly done, and by May 10, 1975, Pope Shenouda again wrote conveying His approval and plans to send over a second priest to help Fr. Raphael.

The Bible study meeting continued at the founding servant’s homes until the arrival of Fr. Pasanty Anba
Beshoy (Presently Bishop Pasanty of Helwan), when the first Mass for The Virgin Mary Coptic Orthodox
Church in Montreal was held on October 31, 1976, in a rented Church in Montreal.

The Church went through changes in its clergy. With Fr.Pasanty Anba Beshoy departure to Australia for
service, he was replaced by Hegoman Metias Elsouriany (Presently general Bishop Roues). By March
1977 Fr. Aghabious Anba Beshoy arrived to assist in the service, and held the first mass on March 11,
1977. Fr. Aghabious left with Pope Shenouda on April 25, 1977, after his visit to Montreal and was
ordained Bishop Aghnatious of Sues. The service was handed to Fr. Wisa Elsouriany (Presently Bishop
Izak), until July 22, 1977, when Hegoman Pasanty Anba Beshoy was sent back from Australia to help him.
The Service in the Church finally stabilized with Pope Shenouda III sending FR, Arsanious Aziz to serve at
the Virgin Mary Church, and Fr, Arsanious arrival on December 2, 1977. Service continued in a rented
Church basement in Montreal, until an Anglican Church offered for sale was found in Longueuil. The
Anglican Church had suffered a fire that destroyed the basement Kitchen and the altar above. After
inspection of the building, it was established that there was no structural damage and that the glass
stained windows were all intact, the board decided to place a purchase offer, that was accepted and
signed in March 1981. Repair work on the building was carried out in earnest and the first mass was
prayed on June 5, 1981, in the presence of Bishop Antonious Marcos of Africa, Bishop Tadros of Port
Saiid, and a delegation sent by Pope Shenouda III to consecrate the Church.

On December 24, 1986, Pope Shenouda sent Fr. Marcos Aziz to take over the reins of the Virgin Mary
Church and the service stabilized and flourished in the Church for a good while. But disaster struck on
August 6, 1989, when a fire consumed the Church in Longueuil and destroyed it completely, a month
before a planned visit by Pope Shenouda III to Montreal. His Holiness ended serving mass with his
congregation in a rented Church on September 24, 1989.

The search for a new church continued, and by January 1990 an industrial building in St Hubert was
found, and purchase negotiation with the seller, and zoning discussion with the municipality started. The
final purchase of the property with God’s grace was finalized on September 6, 1990. Fr. Marcos Aziz
soon left back to Cairo on September 9, 1990. Renovation started in earnest and the first mass with the
presence of Bishop Roues on a cleared space in the new building was held on September 22, 1990. The
service in the church continued again on an interim basis with the support of Fr. Bishoy Saad and Fr.
Raphael Nakhla of St Mark Montreal until Pope Shenouda sent our beloved Fr. Seraphim Youssef on July
10, 1992 to serve the Church of The Virgin Mary. The Church was finally consecrated by His Holiness
Pope Shenouda III, and the accompanying delegation on November 29, 1996.